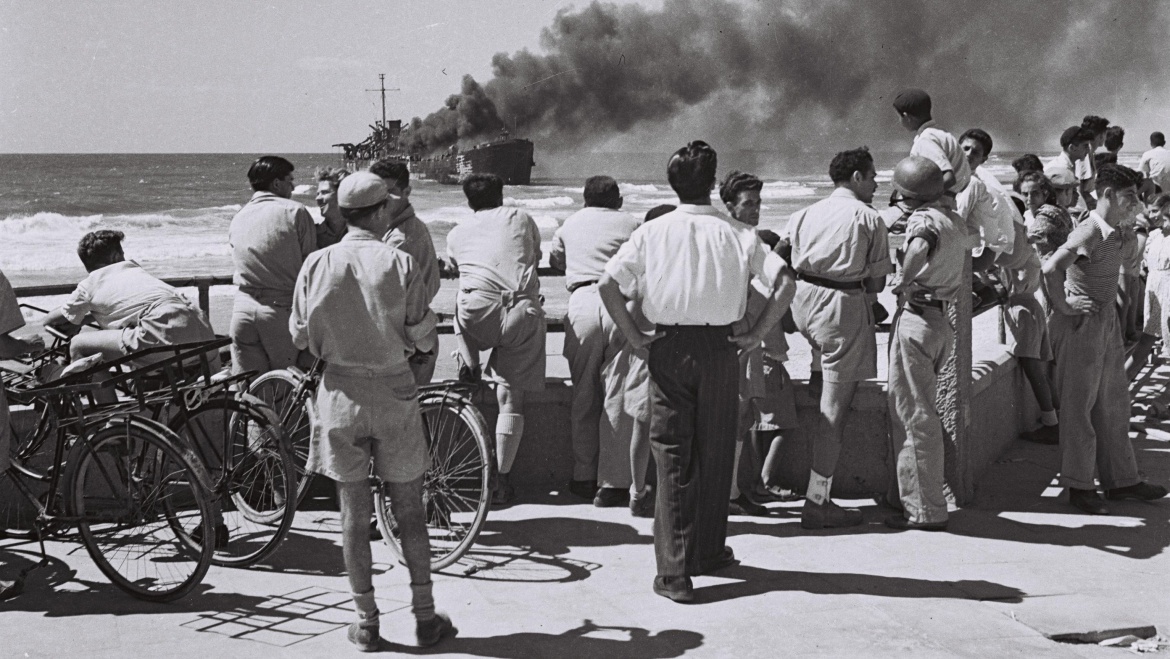 in Dv'ar Torah Views 1421
THOUGHTS ON THE PARASHAH
Rabbi Evan Hoffman – Congregation Anshe Sholom
evanhoffman@gmail.com
Parshat v’Zot Ha-Berakhah – פרשת וזאת הברכה
Simchat Torah 5779
This essay is sponsored by Diane Steinfink in memory of Ida Bartel Steinfink, Philip Steinfink, and Iryn Steinfink.
The Western Sea
In the waning moments of his life, Moses ascended Mount Nebo on the east bank of the Jordan River. God then showed Moses the great expanse of the Land of Israel, the Promised Land, which Moses was not destined to enter. In describing the geographic scope of Moses’ vision, Scripture mentions among other regions “the whole land of Judah as far as the Western Sea הים האחרון (Deuteronomy 34:2).”
The plain meaning of הים האחרון, translated hyperliterally as “the last sea,” is the Mediterranean. Scripture elsewhere uses the same terminology to describe the western border of Eretz Yisrael (see Deuteronomy 11:24). For the ancient Hebrew, whose day was determined by the rise of the sun in the east and its setting in the west, language developed such that words connoting “forward,” “early,” or “shining” were employed to mean the east, and words connoting “rear,” “last,” or “evening” referred to the west.
Meshech Chochmah offered an interesting theory about the etymology of “the Last Sea.” An Aggadic tradition claims that, in addition to the major deluge in the days of Noah, God released flood waters on the earth two other times: 1) in the generation of Enosh, when man first stumbled into theological error and 2) in the generation of the Dispersion, when construction of the Tower of Babel represented man’s rebellion against God (Yerushalmi Shekalim 50b). How far did the flood waters reach? In the first instance, the ocean extended as far east as Calabria and the Barbary Coast. In the second instance, the waters extended as far as Acre and Jaffa (Genesis Rabbah 23). Meshech Chochmah understood the Midrash to mean that the Mediterranean Sea did not come into existence as part of the initial acts of creation recorded in Genesis 1-2. It emerged later. Hence, the “Last Sea” refers to its chronological lateness, not to its geographic position to the west of Eretz Yisrael. He marshaled support for this theory from halakhah. The blessing typically recited upon seeing impressive natural phenomena is “Blessed art Thou…. Author of Creation.” Yet the blessing upon seeing the Mediterranean Sea is “Blessed art Thou… who has made the great sea” (Mishnah Berakhot 9:2). Consistent with this theory, the standard blessing could not be recited because the Mediterranean was not part of “creation.” Without attributing to the rabbis advanced knowledge of oceanography, one can, nonetheless, find faint hints in the Midrash to the modern scientific theory of the Zanclean Deluge in which, 5.33 million years ago and following the Messinian salinity crisis, Atlantic Ocean waters purportedly refilled a desiccated Mediterranean Sea via the Straits of Gibraltar.
The homilists embellished upon Moses’ vision, adding the dimension of time to that of space. One interpretation has it that Moses was shown future moments of tranquility and devastation that the tribes of Israel would experience in their various regions in the national homeland. Alternatively, Moses was shown the highlights of world history, spanning from Genesis until the arrival of the Messiah and the resurrection of the dead. The textual hook for this fantastical interpretation is a homiletic rereading of ים האחרון as יום האחרון, meaning “the final day” (Sifre Deuteronomy 357). Pseudo-Jonathan understood אחרון to mean the final Temple and that Moses had visions of Jewish history up to Titus’ destruction of the Second Temple in 70 CE.
The idea that Moses, while still alive, was shown an accurate vision of the apocalypse might seem inconsistent with other aspects of Midrashic interpretation. On his deathbed, Jacob instructed his sons “Assemble yourselves and I will tell you what will befall you in the end of days (Genesis 49:1).” The sages said that Jacob wished to reveal to his sons the precise timing of the messianic redemption, but that at that very moment the Divine Presence departed from Jacob rendering him unable to reveal that sensitive information (Pesahim 56a). The sages generally frowned upon speculation about the end of days or calculations concerning the hour of Israelite redemption (Sanhedrin 97b). Such matters are not for us mortals to know. Yet, supposedly Moses, all alone and minutes away from his death, was an exception to this principle.
I have difficulty embracing the Midrashic claim that Moses was shown future events as he took his final breaths. For me, such commentary falls under the category of כל המוסיף גורע, “whoever adds [too much, verily] subtracts.” Moses did not ask God for immortality or even an inordinately long life. Accordingly, giving him a vision of future events that he will not live to see is not an appropriate consolation prize. Time and again, through heartfelt prayer, what Moses did request of God was his being permitted to enter the Land of Canaan. After leading a band of nomadic tribes in the wastelands of Sinai and Transjordan for forty years, the paternalistic Moses wanted to enter the land vouchsafed by God as the people’s territorial destiny. Given that explicit wish, which for reasons of his errors at the Waters of Strife Moses was not granted, his ability to view the totality of the land from just beyond the border was an appropriate (though limited) reward.
When I conclude the annual Torah reading, my lasting thought is not of Moses’ having futuristic visions of the Exodus 1947 towed out of Haifa Port into the Mediterranean Sea, or of his seeing the Altalena being unloaded of its munitions at Kfar Vitkin and then ablaze in Mediterranean waters, just meters from the Tel Aviv beach. Rather, it is that the great liberator and lawgiver simply saw the homeland with the glimmering waters in the western distance. It is a simple and poignant scene. It is the bittersweet way in which the Torah ends.
Hiddur Designs and Technology © 2016 All Rights Reserved